It wasn’t funny, and we never made it to Jerome.

With Jerome, Arizona as the destination, my planning had been meticulous. The calculated route included both fuel and dog relief stops. I packed the small cooler with snacks for the dogs and me.

Before dawn, with the dogs in the car, we first stopped for fuel. While gas poured into the tank, I washed the windows. Finally, we headed for our desert spot. Bernie and Chris needed a relief stop before the long Jerome drive.

With a beautiful pre-dawn photo less than two minutes away, I entered the desert to let the dogs out.

In my excitement to capture a great sunrise photo, I neglected to unlock the rear door. The heavy driver door slammed shut and locked me out of the car.

The dogs and the keys were locked in the car. My methodical plan was ruined.

Stunned. I didn’t want to believe it. The spare car key was inside the fanny pack. Unfortunately, Siri wasn’t installed on my iPhone.

After twice circling the car, checking all doors, I decided to break a window. Deciding on the front passenger window, I found a rock and banged on the top of the window five times.

All I efforts brought were a few white scratches on the window. Hardly seen inside the dark, tinted rear window, Bernie disgustedly looked away.

My next move was to call Sheri, my next-door neighbor. She contacted the sheriff department. The police dispatcher transferred the information to the fire department.

Once they understood what desert area, my vehicle was easy to spot. Had I understood how to operate my iPhone, I would have been able to share GPS coordinates.

I gave instructions to head north on El Mirage Road, and I was two football fields in the desert, about a half-mile before Hwy 303.

About twenty minutes later, a welcome fire truck arrived. To avoid being stuck in the desert, the heavy vehicle parked on the road. 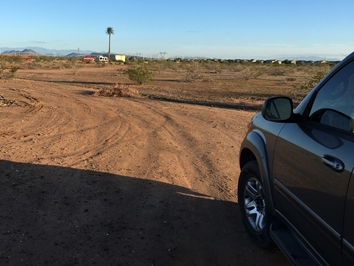 All three fireman trudged about 300 feet to the Toyota.

The leader, Steven, shared that his wife had the same Toyota model and experienced the same lockout issue. Once she shut the door, it automatically locked. I’ve often left the keys in the center console tray. I will never do that again.

They had the proper tools for the task. They laughed when I remarked they hadn’t brought a fire axe.

After checking the doors, they used a stiff, flexible wire to fish through the tight door opening. When I told them of using a rock on the window, they told me it was the wrong window area.

The correct place to break a window was on either extreme lowest right or left corners. A sharp screwdriver tap broke the glass. 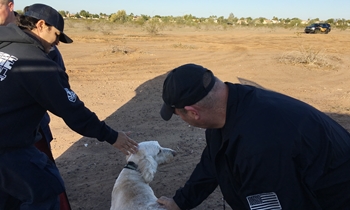 Within ten minutes, with the driver door opened, I unlocked the rear door, and both dogs leaped out.

We watched both dogs escape and run free.

Captured for more than an hour in the back seat the dogs barely acknowledged the men before they rushed to relieve themselves. Chris then return for a quick appearance then went back to explore the desert. Because he loves being petted, Bernie stuck around.

As the police arrived, checking to ensure everything was okay, the firemen left.

Jerome, Arizona will have to wait for another day. I wanted breakfast, and so did the dogs. So much for making plans.