This time we made it to Jerome. At eight o’clock it was a beautiful, very cool 47-degree Sunday morning. With two days before Christmas, the dogs and I were visiting our last 2018 historical Arizona community.

Our first attempt proved a disaster of my making. It happened on the first of December. Long story short, in the desert I locked myself out of the car, and the fire department had to find and recuse me. “A funny thing happened on the way to Jerome, AZ” described the details 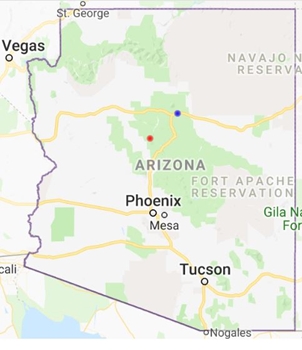 Jerome was 117 miles from our home in Phoenix. The two-hour trip seemed a comfortable ride on smooth, divided highways I-17 to AZ-260. Compare that to travel in a stagecoach in the 1800s.

On the map, Jerome is the small red dot. Flagstaff is a small blue dot.

Back then, it was a torturous two-or three-day ordeal. The horses averaged five miles per hour over rough roads. They changed horses at stage stops located every forty miles. The journey required at least one overnight stay.

Jerome perched mile-high and was located 100 miles from Phoenix and 60 miles from Flagstaff. It clung to the side of Cleopatra Hill on a 30-degree sloop, 2,000 feet above Verde Valley in central Arizona.

In 1876 they discovered rich copper deposits. Jerome would become the largest copper mining in Arizona Territory. I wanted to explore the mine.

When the town was just a small mining camp, they needed financing to pull the copper from the abundant ore. After some coercion from his wife, Eugene Jerome invested. Although he never visited the town, the town took his name.

Eugene was a New York lawyer and cousin of Sir Winston Churchill’s mother.

William A. Clark made significant contributions. He brought in a narrow-gauge railroad, that reduced freight charges to keep the mining operation profitable.

More important, “To keep the miners happy and in town, William Andrew Clark, the owner of Jerome and Arizona’s United Verde Copper Company, provided sufficient gambling, drinking, opium and female companionship to all of his workers.” In 1903 the New York Sun declared Jerome to be “the wickedest town in the West.”  That distinction became critical to Jerome’s future success.

The initial need for copper was World War I. From 1919 to 1939 over 3.6 tons of copper, silver and gold ore was extracted from a single Little Daisy mine. Jerome’s population swelled from 250 to almost 15,000. However, once the war ended, the boom was over, and the copper price dropped until it was no longer profitable to keep the mine open.

By 1953 the population was down to 100. The government practically gave buildings away in the 60s and 70s. Struggling folks, primarily artists, took advantage of the opportunity to move in.

In 1953 they formed the Jerome Historical Society and began to restore buildings and hundred-year-old haunts that gave the town its character. 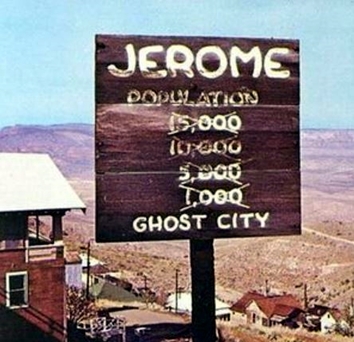 Recognizing that Arizona listed nearly 300 Ghost towns, they decided to feature that information. They highlighted Jerome’s dwindling population with a sign. The last line was “Ghost City.” They saved the town from oblivion when the residents emphasized tourism and retail sales.

“Today, when you visit Jerome and its historic buildings, you are given an opportunity to take a step back in time, feel the past and experience life as it might have been in Arizona’s rough and rugged days.”

We had to go through Cottonwood to AZ-89A. This twisty road snaked its way through Jerome and continued to Prescott. Open 365 days a year, in 1967 Jerome was designated a National Historic Landmark. 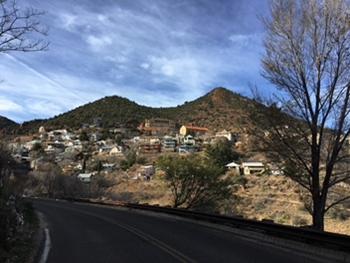 Our first glimpse of Jerome.

The Main Street switchback had a 1500 feet separation from its top to the gulch in the lower town. 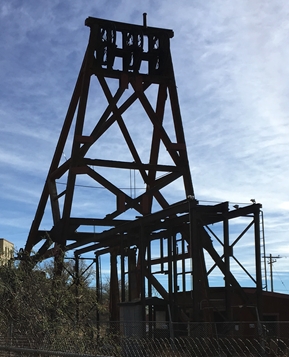 Our destination was the Historic Audrey Shaft Headframe Little Daisy Mine. A 1900-feet deep mineshaft at 55 Douglas Road.

That made it 650 feet deeper than the Empire State Building is tall.

From 1919 to 1939, the Little Daisy Mine Audrey wood Headframe beam used three sets of pulleys and cables to hoist over 3.6 tons of copper, silver and gold ore.

The sulfur-rich ground could produce fire, so the Audrey was concrete-lined every 100 feet

The Edith shaft headframe, completed in 1915, hauled men and supplies.

Up the hill to the west, the Daisy shaft was the main air intake for the mine.

Jerome had 88 miles of mine tunnels underneath the town. 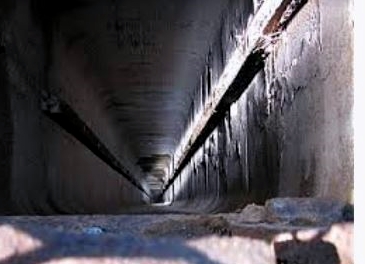 I stood on the thick glass shaft cover and looked down the 1900-feet mine   shaft.

Model of Jerome mining operation. The thin wires show the underground workings that represent 88 miles of shafts and tunnels.

They brought ore to the surface then transported by tram and burro train, to the railhead in the valley.

Later, ore was taken out through the Josephine tunnel. This tunnel was 1300 feet underground and 2½ miles long.

I learned a lot regarding challenges that pioneers faced. As 2018 ended, I was grateful for the several 2018 years road trip adventures to Arizona’s historic communities.