I am Picacho Peak.  Although seven other ‘picacho’ were mentioned in this area, the Anza Expedition first recorded me as a prominent landmark in 1774. Picacho is Spanish for ‘big peak’ so picacho can describe any mountain.

My recorded history positioned me at 22 million years old, four times older than the Grand Canyon located less than 200 miles away.  I continue to be a landmark for travelers seeking water and shelter during their journey in Arizona’s dry Sonoran Desert.  For too many years, people thought I was a ‘neck’ or molten core of a volcano.  Although many volcano necks exist in this part of Arizona, I am not one.  My soil composition is a metamorphic core complex (MCC), an underground magma flow that never reached the surface.

MCC is a term used to describe land stretching. A way to describe the process is to think of breaking in half, a caramel-filled candy bar.  “The chocolate breaks but the caramel inside stretches and deforms.” The result is many displaced fault breaks that result in my sharp, distinct peak.

My elevation of 3,374 feet is the highest landmark. I’m located directly off Interstate I-10 between Phoenix and Tucson, the two largest cities in Southern Arizona. In 1932, the Civilian Conservation Corps (CCC) attacked me with picks and steel rods as they persistently fought their way to my highest tip.  There, they sank steel rods to anchor a forty-foot tower that housed a 500-watt beacon light. I became part of a vast, Coast to Coast mountain-top lighthouse roadmap, for airplane pilots flying at night. 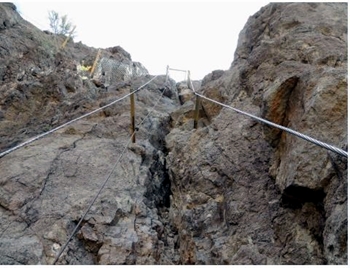 Today, hikers continued using the climbing aids constructed in 1932.  Two aids, ‘Ferrata’ (Italian for the iron road), and ‘Kletterstig,’ (German for climbing path) composed of cables, catwalks, handrails, and ladders. Such aids helped nervous hikers overcome the steepest parts of the dangerous route. Otherwise, added climbing equipment was required.  Despite the difficult work performed in 1932, the lighthouse beacon was dismantled in 1965. Several steel rods still stick out from my sides.

I squatted on the desert floor for centuries. Over time, thousands have visited me. The Hohokam people lived at my feet for several hundred years.  Raiding parties of Apache and Yavapai lived and fought in this area. The Anza Expedition seeking a route to California passed by in the 1700s. A century later the Mormon Battalion created the wagon road through Picacho Pass. The road allowed the forty-niners to use this road on their way to California.

My most celebrated human event occurred on April 15, 1862. Declared a Confederate victory it was the only Civil War fought in Arizona between 13 Union cavalry and a band of 10 Confederate Rangers under Captain Sherod Hunter from Tucson, Arizona.

Each year, in March, over 200 re-enactors from many states wear their authentic Civil War gear and camp on me.

Spring was also when nature provided me an opportunity to dress up with a tapestry of color. Around my base Mexican Gold Poppies. Wildflowers grow.

Small networks of hiking trails scar me. The Hunter Trail, in honor of Captain Hunter, is popular.  Hikers knew it as “a four-mile-round-trip butt-kicker.” I may be old, but I still present a challenge.  A hiker wrote, “…we had to hang onto a cable and walk across an old make-shift-bridge while doing so to keep from falling down the cliffs.  In other areas, you had to hold on to the cable and climb straight up the rock.”

Individuals and organized groups climb me. Over the years, I’ve enjoyed watching groups of Boy Scouts with their enthusiasm; confident they attempt reaching my highest point to earn their Hiking Merit Badge.

Treasure hunters sought cleverly placed Geocaches. These adventure seekers, equipped with GPS devices, played the high-tech treasure-hunting game. My lower ground levels have always been available for camping from a blanket on the ground to today’s rolling palaces.

People of all ages test themselves on me. Some people turn back after reaching and resting, at my famous ‘saddle’ landmark. Although I am only 2,960- feet high, for many, the hike is for more than they bargained.  Others return year after year.

Two men were talking. I overheard one man introduce himself as ‘Gary,’ He said, “About five years after my heart attack I made the hike in March each year to celebrate my return to health.  My annual hike has coincided with the Civil War re-enactment twice in those ten years.” He continued, “Before my heart attack, I weighed 210 pounds and never felt like hiking.  After getting my body cleaned out (weight 158), I had more energy and needed a place to spend it.” His wife, Bonnie, is always with him on this annual pilgrimage. A difficult hike, and each year she hinted it was her last. The next year she was there, with him.

The key to a successful hike on me was doing it when the temperature was below eighty degrees. Hikers didn’t try me when it got hot. I am composed of dozens of awkward angles, so slips and falls occur.  Although skinned hands and knees happen, a foot injury was the most common.  Proper hiking shoes or boots and gloves are standard.  Even more important was plenty of water. Savvy hikers agree ─ take twice the quantity of water as you think you need.

Most people recognize my profile from a distance. Gary videotaped the entire hike. The video captured his labored breathing as he climbed me. Unlike viewing me from a passing vehicle on I-10, the video showed me in vivid detail.

Hikers who made it to my summit were rewarded by the same view I experience during daylight hours.  Although my view is exceptional at night, I remain closed to the public. It was not safe for people to be on me during darkness. In 1968, I became part of the Picacho Peak State Park system.