On June 1, 2018, I discovered being wrong three years ago. Considering the amount of time and trouble I encountered; I remain excited being proven wrong. Well, although I’m not happy proven wrong ─ I’m still excited.

The adventure began in June 2015 when I strolled through the desert with my dogs, Bernie and Chris. I spotted a bird perched on a thin branch.  When Bernie got too close, the bird flew a short distance and settled on another branch. Although the bird’s behavior caught my attention, I paid it little care and continued to cruise through the low desert brush.

Unleashed, both dogs investigated and hunted critters. Despite their enthusiastic pursuit, they never caught anything.

I wandered in a large circle and ended at the car. While waiting for the dogs to jump into the car, I searched for the bird and found it balanced on the same branch. What kind of bird was it?

For the next five months, my entire focus was to identify and photograph that bird. It became my most frustrating and exciting summer.

I was like the bowler  who struggled for the perfect game, yet never achieved it.

In my previous book, “Challenges and Rewards,” I shared my attempts. “Something happened recently. When I let the dogs loose, I go walking in the desert. The dogs are investigating, but they are always nearby. A few weeks ago, Bernie and Chris went too close to some birds. Two flew up and dive-bombed the dogs. No harm was done. I walked close enough to identify them. I thought they were hawks.

Since that day, I’ve carried a camera. Without a zoom lens, and a slow shutter speed, I’ve never gotten within eight feet before a hawk flies away. I believe these are Cooper Hawks (named after the naturalist William Cooper [died 1864]). Each day I see two hawks and believe they are paired. The female is larger than the male. Four hawks are the most I’ve seen at one time. I’ve gotten within ten feet of a hawk before it flew away.”

Every day from the first time I spotted Henry Hawk until sometime in late September, I carefully approached his vicinity. I wanted a vivid photo of him in flight. Yes, I named him Henry Hawk. After much research, I determined that it was a hawk, not an owl. I told everyone about Henry. I convinced myself and therefore had to convince everyone else. I even brought a couple of people to see Henry. We were never able to get very close before he flew away. By now the dogs knew our routine and ran close to the hawk area before I got there. When the dogs got too close, Henry flew.

The last time I saw Henry Hawk was late September 2015. After that, coyotes and rattlesnake concerns kept me from using that part of the desert. Whenever we drove by the desert, I always thought of Henry Hawk. I missed him.

This morning, I opened my online subscription of DesertUSA and found Henry Hawk.

I was wrong. As I looked at the birds and learned about a burrowing owl, my excitement grew. Unknowingly, I was blessed with a wonderful experience. I had the unique pleasure to be among a burrow owl family. I had watched them, tried to take photos, and plotted how to sneak up on them. I spent hours distracting my dogs so I could creep up Hawk Hill before the dogs joined me.

Before today, this was what I knew of owls ─ aka Henry Hawk. I knew nothing.

I recall the story of the football player who picked up a loose football and ran the entire field for a touchdown ─ only to discover he ran to the opponent’s touchdown end. That’s what I did. I identified an owl as a hawk. I was wrong.

Now pointed in the correct direction; this is what I learned. The Burrow Owl is the only raptor in the world to live underground. They don’t dig but rely on other animals to make the burrow and then move in. In Arizona, the armadillos, skunks, tortoises, prairie dogs, and ground squirrels are burrow building candidates.

The Burrow Owl is small, from 7.5 to 10 inches tall. They are not picky when it comes to diet. If it moves, it can be eaten. Their diet includes beetles, grasshoppers, spiders, small birds, amphibians, reptiles, and small animals.

Since they live in open grasslands, the burrowing owl has developed long legs that enable them to sprint when hunting. The baby owls (owlets) can scare away their predators by mimicking rattlesnake sounds.  They make a chattering or chuckling call and bob their heads when they are excited or distressed.

Although these owls can live about nine years, their population continues to decline because land development destroys their natural habitat. One organization, Wild At Heart, has been rescuing and rehabilitating burrowing owls since the early 1990s. They provide food and shelter and build artificial burrows. Colored bands are put on birds so people can track the individual bird.

Started in 2013, the Phoenix Downtown Owls Project volunteers have built more than 250 artificial burrows in that area.  The Rio Salado habitat used to be a literal dump.

This picture is of a hand-dug burrow.

Artificial burrows excavated about four feet deep, maintain a 75-degree temperature.  Tunnels always have a severe bend, and the total length can be ten feet. Bends serve to block light and provides a defense against predators.

Artificial burrows consist of a five-gallon bucket and about ten feet of flexible tubing. Rocks prevent erosion and keep predators from digging up the burrow. 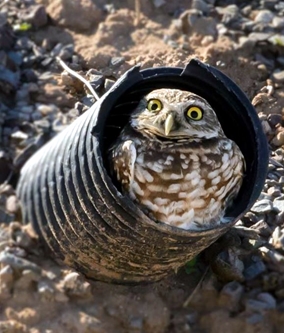 Although I know Henry was an owl, he’ll forever be my Henry Hawk.