A few evenings ago, while Bernie, Chris and I are exercising, I experience a funny feeling. As a writer, it’s disconcerting not being able to describe my feelings. “Funny” doesn’t cut it.

I look around, expecting to see the dogs. This exercise area has construction nearby, and that’s always a dog-safety concern. It’s after work hours, but I’m not comfortable when I can’t see both dogs. Bernie isn’t a problem. His large white body is easily visible.

Chris is my lovable scamp. He loves to investigate and delights in finding some way to squeeze through narrow construction fence openings.

I used to worry about him. However, over time I’ve come to accept that’s his nature. He always dances back when I blow my dog whistle. When he’s not racing back, he’s prancing as if to say, “See, I’m okay and had a great time!”

My walking route is in the street that surrounds the construction site. I am near a corner and decide to investigate the lot across the road. Turning into the vacant lot, I spot both dogs crowded together. Bernie is eating something, and Chris keeps darting in, trying to get a piece from Bernie.

Bernie is a garbage gut. He’s eats anything, no matter how disgusting. Walking with trek poles, I increase my normal gait. Yelling for Bernie to “Drop it,” isn’t effective because I don’t put enough emphasis in my voice. Although I want him to drop it, I know its much too tasty or he would have already released it.

Getting closer, I identify a mangled rabbit carcass. Bernie isn’t the first animal chewing on this cadaver. I don’t know what killed the rabbit, nor how long it’s been lying there. The smell overpowers me as I scream, “Drop it!”

Reluctantly─very reluctantly, Bernie drops it, and Chris starts making moves to grab it. “Chris, NO!” The harsh command is enough to make his entire body flinch as if he’s been shocked. Chris is very shy and reacts to sudden loud noises.

With both dogs circling nearby, I use both trek poles as chopstick ends. Holding my breath, I squeeze collected limp body parts. I carefully raise the mess. My goal is depositing the scraps on top of the six-foot cement wall. I have only one chance before my trek poles lose their grip.

Both dogs sense my intense concentration maneuvering their tasty morsel out of reach.

Success! Releasing my long-held breath, I lower the poles. I’ll have to clean the rabbit mess stuck to both pole ends when I get home.

Bernie and Chris don’t sniff the shafts but appear confused why I took their food away. They go back, sniffing around the area, hoping to find more of the smelly stuff. Unless they want to eat dirt, sticks, and small stones, nothing of the rabbit is left.

As they seek leftovers, I’m heading back to the car. Once there, I call both. Accepting defeat and knowing the only food they will receive is when they get home, the dogs leisurely walk to me. It’s too hot to trot and too disappointed to hurry.

Going through the practiced motions of opening the door and herding them inside, I know what will happen the next time we come here. As soon as I open the door, both dogs will leap out and race to the spot, seeking to finish off eating the rest of the smelly rabbit carcass.

I guess it doesn’t matter that the corpse is high out of their reach. In any event, tomorrow evening I’ll see if I’m right.

I’ve been watching the clock since six. The dogs sense its time for their late afternoon exercise. Dog time doesn’t need human clocks. They know when it’s time to eat and go outside to play. I get soft nudges and laser-focused stares to give me hints I’m required to pay attention to their needs.

Neither dog barks for attention. In fact, Bernie rarely barks. In the seven years, I’d had him, I recall him barking twice, and even though I struggle to recall that low number, I don’t remember the reasons for it.

Chris is my watchdog. His bark is an immediate announcement before the doorbell rings, or the UPS driver arrives. Thankfully, when I tell Chris to stop barking, he obeys.

It’s triple-digit hot, so I’m waiting until almost dusk before I go. The dogs continue being anxious and start dancing around. I relent and leave at seven-fifteen, a good thirty minutes before sunset.

We arrive and true to my prediction, they leap from the car, race around the back and make a beeline for the exact spot. I retrieve the trek poles and start after them.

Both dogs continue searching the ground.

Chris is first to break off and wander out into the field. From his actions I know he’s heading to one of his favorite spots to do his business. He’s so predictable.

Bernie has an incredible nose and doesn’t give up. Finished with the site I saw him gnawing on the rabbit yesterday, he moves over to the wall. 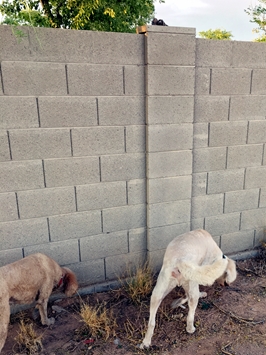 Chris, finishes, and races back to join Bernie at the wall.

What they seek remains plopped on the top brick.

Accepting their loss, as far as they are concerned the exercise trip is a bust.