This morning I did my walk… with a difference. It was 3:45 at 66 degrees. Before I got the front door open, Bernie and Chris greeted me. I decided to take them with me. At that early hour, knowing rabbits and coyotes are around, I leashed them.

It was a good thing I did. Suddenly, I spotted my former ‘walker’ striding down my street. I’d had a run-in with her four years ago around this early morning time. Back then, she threatened to report me to the office.

At that time, I only had Bernie, and he was unleashed.  We used the back fenced area for his exercise. I also rode the trike as he ran alongside.

Today I was ‘legal’ with both dogs properly leashed.

She’s not a pleasant person. I wouldn’t enjoy having a conversation with her. She strikes me as a ‘control person’… from her posture and method of talking.

How do you describe a person who…though not shouting at you… utters every word as a dare to be challenged?

Fortunately, she didn’t say a word, and I ignored her and thought about a new task awaiting me.

My old car seats are starting to show wear. Both the front and back leather seat seams are separating.

Last year, when I had my leg wound, the nurse used a wonderful plastic bandage that comes in large sheets. I still have about a dozen sheets. I have been using them to patch the seat seams. It works for a few months.

I’ve ordered some fabric seat covers specifically made for the Toyota. The cost is forty-nine dollars for both front and back seats. They should arrive by Saturday. Because we will be traveling to Oatman, Arizona Saturday, I’ll put them on sometime next week.

I’ve never replaced seat covers. It is also the perfect time to clean out the car. Dog hair… as fine as it is… does fly around when the windows are open.

I glanced skyward, hoping for a clear moon, but it’s partially hidden by cloud haze. Although still dark at four, the moon’s ambient light backlit the clouds.

We turn back, and as we approach our home, I make an abrupt left turn. It forces Bernie and Chris to squeeze together against me so all three of us can walk on the narrow brick footpath.

It’s exactly forty-five steps to the back gate where I unleash the dogs. They slip through the double iron gate and eagerly head for the water bowl.

I turn on the water, knowing it will take about five minutes before the water overflows the cement block garden wall and starts flooding my backyard neighbors’ patio. 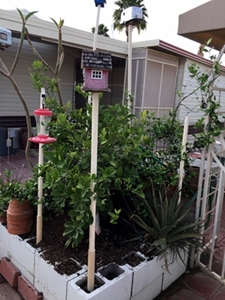 No problem. The home is for sale, and they left last Tuesday. I’m watering at four in the morning, and any standing water will evaporate within several minutes.

Leaving the drinking dogs, I enter the back door and head for my first cup of coffee. I prepared it before opening the front door.

With coffee in hand, I will casually stroll back outside to turn off the water.

The dogs will have finished drinking. They are ready to curl up next to me at the computer when I check what’s happening on the Internet.