I received this email from my friend Mike Kapic. We live in the same area of Surprise, Arizona.

We hear the Sound of Freedom several times a day at our house as Luke is just south of us.

Good morning….. welcome to the United States of America! Make sure you read to the end, that’s where it gets really good!

Luke AFB is west of Phoenix and is rapidly being surrounded by civilization that complains about the noise from the base and its planes, forgetting that it was there long before they were… A certain lieutenant colonel at Luke AFB deserves a big pat on the back. Apparently, an individual who lives somewhere near Luke AFB wrote the local paper complaining about a group of F-16s that disturbed his/her day at the mall.

When that individual read the response from a Luke AFB officer, it must have stung quite a bit.

‘Question of the day for Luck Air Force Base:

Whom do we thank for the morning air show? Last Wednesday, at precisely 9:11 A.M, a tight formation of four F16 jets made a low pass over Arrowhead Mall, continuing west over Bell Road at approximately 500 feet. Imagine our good fortune! Do the Tom Cruise-wannabes feel we need this wake-up call, or were they trying to impress the cashiers at Mervyn’s early bird special?

Any response would be appreciated.

Regarding ‘A wake-up call from Luke’s jets’ On June 15, at precisely 9:12 a.m., a perfectly timed four-ship fly by of F-17s from the 63rd Fighter Squadron at Luke Air Force Base flew over the grave of Capt. Jeremy Fresques. Capt. Fresques was an Air Force officer who was previously stationed at Luke Air Force Base and was killed in Iraq on May 30, Memorial Day.

At 9 a.m. on June 15, his family and friends gathered at Sunland Memorial Park in Sun City to mourn the loss of a husband, son and friend. Based on the letter writer’s recount of the fly by, and because of the jet noise, I’m sure you didn’t hear the 21-gun salute, the playing of taps, or my words to the widow and parents of Capt. Fresques as I gave them their son’s flag on behalf of the President of the United States and all those veterans and servicemen and women who understand the sacrifices they have endured..

A four-ship fly by is a display of respect the Air Force gives to those who give their lives in defense of freedom. We are professional aviators and take our jobs seriously and on June 15 what the letter writer witnessed was four officers lining up to pay their ultimate respects.

Whom do we thank for the morning air show’? The 56th Fighter Wing will make the call for you, and forward your thanks to the widow and parents of Capt Fresques, and thank them for you, for it was in their honor that my pilots flew the most honorable formation of their lives.

Only 2 defining forces have ever offered to die for you….Jesus Christ and the American Soldier. One died for your soul, the other for your freedom.

Love it!  This has got to be one of the greatest quotes of all time. I thought this might make you smile. :-  … conversation overheard on the VHF Guard (emergency) frequency 121.5 MHz while flying from Europe to Dubai.

Iranian Air Defense Site: ‘Unknown aircraft you are in Iranian airspace. Identify yourself.’

Aircraft: ‘This is a United States aircraft. I am in Iraqi airspace.’

Air Defense Site: ‘You are in Iranian airspace. If you do not depart our airspace we will launch interceptor aircraft!’

God bless our troops. There is something about a Marine that makes other countries listen to reason.

How ALL phones SHOULD be answered

GOOD MORNING, WELCOME TO THE UNITED STATES OF AMERICA.

Please Press ‘1’ for English…. Press ‘2’ to disconnect until you learn to speak English

If you agree…… Keep it going, if you don’t agree…  Delete it, but you won’t forget that you read it. 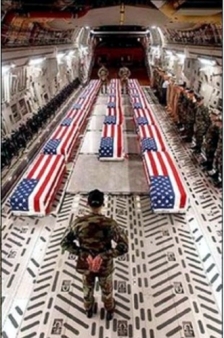