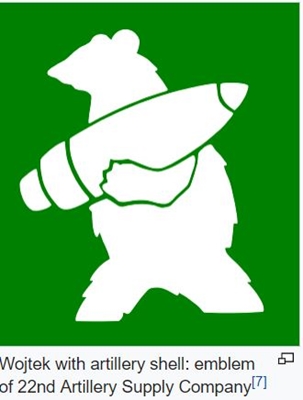 However, friend Marilyn sent me this interesting historical article this morning. I verified its authenticity with several sources. One is https://en.wikipedia.org/wiki/Wojtek_(bear).

Wojtek (Voytek) was a bear cub found in Iran in 1942 and adopted by soldiers of the 22nd Artillery Supply Company of the Polish II Corps.

Soldiers fed him with condensed milk from an emptied vodka bottle. The bear was subsequently fed with fruit, marmalade, honey, and syrup, and was often rewarded with beer, which became his favorite drink. He also enjoyed smoking and eating cigarettes. 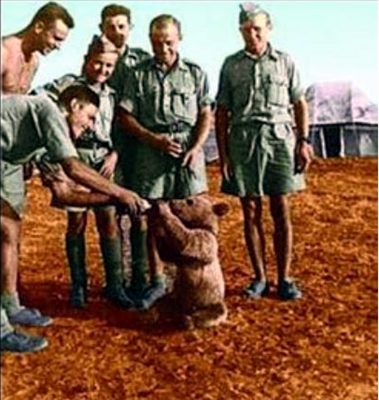 Over the long journey from Iran to Palestine, the bear quickly became the unofficial mascot of the 22nd company. The bear would sit around the campfire with the men, eating, drinking, and sleeping in tents with the rest of the soldiers.

He enjoyed wrestling (obviously, no one had any chance with him) and was taught to salute when greeted.

When the motorized convoy was on the move, Voytek sat in the passenger seat of one of the jeeps, hanging his head out of the window and shocking people walking on the street.

The problem, however, was that British High Command did not allow any pets or animals in their camp, so the Polish Army formally enlisted Voytek into their ranks. He was given the rank of Private (at the end of the war, his rank was corporal), assigned a serial number, and from that point on he was included in all official unit rosters.

The Poles’ Finest Hour of the war came in the battle for Monte Cassino. The campaign was proving to be one of the blondish battles of the Western Front, and the Poles were brought in to make the final push to capture the fortress. During the fighting, Voytek actually hand-carried boxes of ammunition, some weighing in at over 100 pounds, from supply trucks to artillery positions on the front lines. 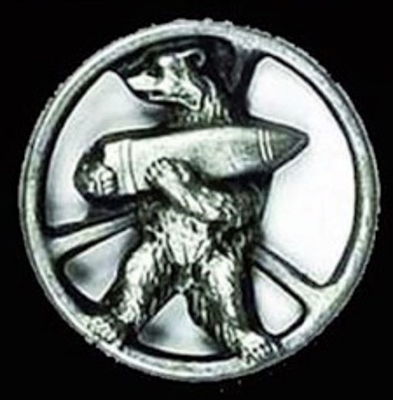 His actions were so inspiring to his fellow soldiers that after the battle the official insignia of the 22nd Artillery was changed to picture of Voytek carrying an armful of howitzer ammunition. After the war, some elements of the Polish Army, including Voytek, were reassigned to Scotland, since Poland was under USSR control, and many Polish soldiers did not like the prospect of living in a Soviet-run police state. 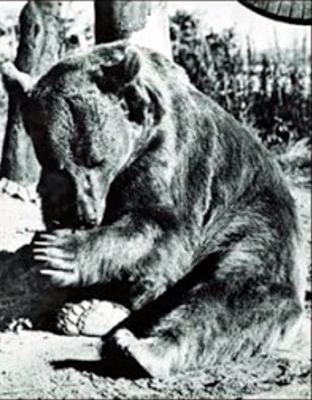 Voytek lived out the rest of his days in the Edinburgh Zoo. He always perked up when he heard the Polish language spoken by zoo guests, and during his life in there he was always being visited by his old friends from the Polish Arm… some of whom would throw cigarettes down into his open arms, some of whom would even jump into the bear enclosure and wrestle with him for old time’s sake.

The bear was a hero of World War II, and there are statues of him and plaques memorializing his brave service in Poland, Edinburgh, the Imperial War Museum in London, and the Canadian War Museum.