I am perpetually plagued with an electrical dilemma. I am convinced it is hardwired in my brain. I’m scared of electricity.

Although I can’t recall how it began, I’m sure it happened when I was a little kid.

I do recall the single incident when I was stationed in Morocco back in the very early sixties. It was during my first overseas tour in the Navy. I operated sensitive electronic equipment. I accidentally touched an electrical terminal.

My body was immediately thrown two feet where I crashed into a cement wall. If the wall hadn’t been there, I’m sure I would have flown more than twelve feet until the other wall stopped me.

I remained conscious. I was alone. I never told anyone. I was too embarrassed.

Since that day, I’ve suffered dozens of electrical dilemmas. I’m fine with the simple light switch. I’m also fairly competent when it comes to replacing batteries. Other than that, I simply become brain dead. I can read the instructions but, even with visual presentations, I fail to understand.

Now I am faced with an electrical dilemma. Which black wire is positive? According to the instructions, if I choose the wrong wire, I will blow a 10amp fuse.

My fear is the wrong selection will ruin my $600 solar investment. I know the instruction manual says it won’t. (that’s why the 10amp fuse is there.)

But I am not convinced.

On Thursday, October 5, 2017, my solar kit arrived. I opened the box and found a thin manual and the components.

Flexible solar panels are now available. However, they require assembling stuff… including making a frame. The single flexible solar panel price is half the cost of my solar unit. The weight is easily one-third less than my portable unit.

A DYI (Do It Yourself) person, handy with tools and electrical knowledge can save a bundle of money building a solar unit.

I’ve shared my lack of electrical knowledge (and fear). That’s why I decided to spend the money and buy the simple Plug N Play solar unit. The result is a unit weighing plus 32 pounds and costing $600.

The Devil is in the details

Somehow, I managed to outsmart myself. I’m still not out of the woods.

One of my Casita modifications was to remove the rat’s nest of electrical wires. It was very difficult to untangle and took too much battery compartment space. The modification was installing an Anderson connector. I love the result.

The red Anderson connector eliminates more than four feet of heavy electrical cable. I can easily remove the battery.

(Unfortunately, this is how my thinking gets me in trouble)

The first thing that went wrong was the day I received the solar unit. I unpacked the box and found two bags of components. 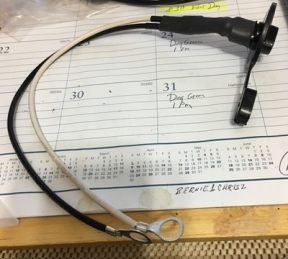 I’m an emotional guy. After waiting a couple of months before I ordered the solar kit, I was very anxious for it to arrive.

When it did, I was sorely disappointed for a couple of reasons. First, it didn’t contain my Anderson connector with the ring terminals.

More important… I faced an electrical dilemma. With two black wires… which one was positive?

I was so involved with my electrical wire issue; I never bothered to examine the other bag.

It contained a white and black wires with ring end connectors. The other end was some connection I didn’t recognize. The bag also contained four rivets and a single sheet of paper.

Because I bought the solar unit from Little House Customs, I called them. Larry was out but was expected to return soon.

I had called in mid-afternoon. When the clock hands pointed to seven, I accepted I had to wait for tomorrow before I heard from Larry.

I opened the second bag and read the instructions.

Hmmm… Now I understood how folks connect their solar unit.

In my enthusiasm, I failed to realize that connecting the solar to the battery meant I couldn’t close the battery door.

Critters could get inside the Casita. Human critters could steal both the solar unit and the battery. I should carefully think about my solar installation.

It would require some careful measuring and drilling. I’ve drilled more than a few holes. If I measured twice and drilled once, I might be okay.

Just about the time I became enthusiastic about this new procedure, I read this chilling statement:

“If you’re handy, can measure accurately and have no fear of drilling, you can drill a 13/16th hole either in the upper left corner above your battery door or the bottom of the body below the battery box.”

After a few more cautions what might happen by sloppy measuring, the last warning was, “You MUST measure carefully!”

I flashed on the many computer warning I get, “Are you sure you want to do this?”

At exactly eight in the morning, Larry called, and we talked. Although he will send an Anderson connection with the ring connection ends, I am seriously thinking of  drilling a hole. I want to lock the battery door when using the solar unit.

The Casita is in storage. Tomorrow I will visit it and do some measuring. I won’t drill. I need to think long and hard before I commit myself.

One thought on “Which wire… black or black?”