The day isn’t over yet. It’s only two on a muggy Friday the 8th of September.

For the most part, my plan for today has been working. At five thirty this morning it was dark when I drove Bernie and Chris to their exercise area. The sun wasn’t about to appear this morning.

It rained during the night, and the humidity was still hanging around. Although dawn should happen, serious dark clouds blanket the sky. It wasn’t raining. However, it was probably going to before I finished my walk.

I wasn’t surprised when feeling a few drops as I neared the car. The dogs hopped in, and I scooted inside and watched the windshield become patterned with thin rain drops. Mother Nature spit at us. The sky started to clear. It only took two swipes of the wiper blades to show me a rain free drive to the storage facility.

It wasn’t a problem to hitch the Casita and tow it home. The numbers were running in my head. I’d been planning this evolution for over two weeks.

I let the dogs out before I backed to a specific position in front of the house. Once I did that, (1) I would finish the hot water tank project, (2) Fill the fresh water tank, (3) Plug in electricity and turn on the fridge to get it cooled.

That was the plan. It almost happened that way.

Did you ever play an instrument… A piano, guitar or some band instrument? If you did, then you know how difficult it is to play the complete piece without making any mistakes.

It takes practice and plenty of it.

Well, I’m a long way from perfection when it comes to Playing the Casita.

The first part turned out to be easy. That part went exactly as planned. It might look simple… I pulled between my neighbor’s driveway and in front of my house and parked.

However, here’s where it gets tricky. My trailer wheel must not be on the sidewalk and no further than six inches in the street from the sidewalk.

One more detail. The street curves and the street dip to the center.

There are two more interesting factors.

The length of the Casita is 17-feet, and the actual clearance between the neighbor’s property line and the clearance I need to park my car in the carport leaves less than 24 inches.

With that information, the actual total length and width of the spot to position the Casita become very tight.

And… The fridge must be completely level to operate correctly. Thus the street side tire must be correctly positioned on blocks exactly within that confined space.

That is why I let the dogs out of the car so that I wouldn’t be distracted. 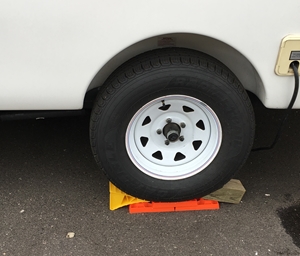 If I was playing the piano, I was successful in the first eighteen music bars. However, the entire music piece lasts two minutes.

I hit my first snag when I plugged into house 110 volts. The Casita’s outside electric receptacle didn’t work.

Two weeks ago, John and I managed to unscrew the original anode rod from the water heater. The stored water gushed out alone with some anode debris. John suggested I vacuum out the rest of the debris before installing the new anode rod.

When the electrical outlet didn’t work, I couldn’t vacuum the debris. Thus Plan B meant I would do it the old-fashion way. I would flush the debris with water.

I removed the plug John created for me. The plug has a screen to prevent bugs entering the empty tank. It also allows air inside the tank to dry.

It was a week from the time we inserted this plug before I was able to bring the Casita home to complete the hot water task.

With the plug installed. 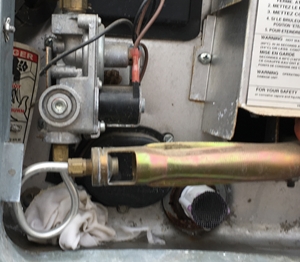 A close view of the plug with the screen. 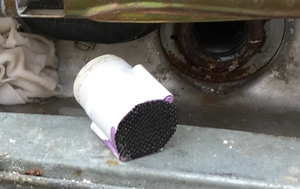 The actual hole in the tank is the dark area immediately to the right.

The flush out tool 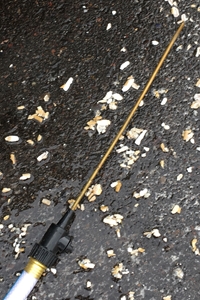 The amount of anode debris resulted when using it. 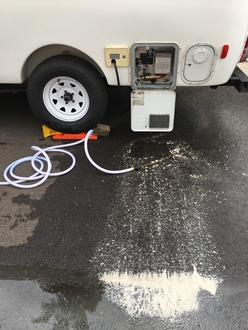 With the tank flushed, I inserted the new anode rod and filled the fresh water tank.

There are probably a dozen minor (but important) procedures that remain before the task is finished. Flipping switches, turning on a propane tank, checking fresh water level to name a few.

When those minor details were completed, I turned on the hot water and smiled as hot water flowed through my fingers.

My music piece was finished… With only a few glaring errors.

2 thoughts on “Playing the Casita”