Sometime in 2009, Katie contacted Casita and made arrangements for a brand-new Casita. She knew the features and options she wanted. They accepted her specifications.

She put down the phone and patiently waited for her order to be filled.

Sometime in 2010, Katie traveled to Rice, Texas in her customized van. She hitched up her brand new 2010 Casita and drove away.

I don’t know everywhere Katie towed the Casita. I know she only took a couple of fairly long trips, less than about eight thousand miles.

She and her husband, Tom, had made lots of plans where they would go and what they would see and do.

Unexpectedly, Tom developed serious medical issues. At some point, Katie regretfully puts the Casita in one of their barns on their Texas homestead. That was more than seven years ago.

As I said, I haven’t been able to fully document every detail of the Casita’s journey from its Rice, Texas maiden voyage.

There is one mysterious significant fact Katie shared… But didn’t elaborate.

The Casita has a rather unsightly ‘scratch’ at the upper left front corner. Katie mentioned it when she advertised it on the Casita Forum. Her advertisement was fairly simple. She had a 2010 17’ Freedom Deluxe for sale for $13,000. She listed several features that make it unique.

One feature she described as “A doe ran between the van and the Casita.” I probably should have probed for more details. Obviously, I didn’t probe enough.

I jumped at this opportunity. I had been seriously searching for a Freedom Deluxe for a couple of months. I didn’t believe I would find one available for another six months.

It became a deal of mutual impulsiveness. I wanted the Casita, and she needed the money for Tom’s medical expenses.

We both gushed with enthusiasm at our common bonds… Birthday’s single digits apart… Similar interests in protecting the environment, our love of dogs… A whole bunch of things that connected us.

Sight unseen, I agreed, and within twenty-four hours she had the money.

When her brother heard about this financial transaction, he declared I was either rich and not concerned how I spent my money… Or I was an idiot.

This idiot was happy. I had a plan, and it was going to work. Within a month I would have a Casita. I started making plans for its modification. I knew I would be taking out one chair to make room for my large dogs. I had many other plans too. However, I couldn’t begin to put them into play until Katie delivered the Freedom Casita to my door.

Within a few days, the original title arrived. A 2010 Freedom model Casita. I rushed to the Department of Motor Vehicles and had it titled in my name. I also contacted my insurance company and added it to my policy.

Then I waited for Katie to arrive.

There was one delay after another, but on July 15th Katie pulled up with my Casita.

All Casita’s look the same on the outside. The Freedom I bought had the following inside configuration:

Katie proudly handed me the keys. I rushed out and unlocked the door. I saw this:

I had bought a Liberty Model Casita. It has a completely different configuration. I’d paid cash. I’d registered it as a Freedom Model Casita.

On August 30th, the sun rose precisely at 6:04 o’clock. The temperature was 84 degrees. I’ve already taken the dogs for their morning exercise. As soon as I got back home, I fed them and went outside to hitch up the Casita.

I’m towing it to the Department of Motor Vehicles.

They open at eight, and I want to have the Casita parked close to their inspection point. The DMV is located in a strip mall. When I arrive around seven, the parking lot should be empty. I must take a number at the title station. Then I will be directed to wait at the inspection station for someone to physically come and check the VIN on the Casita frame.

They will verify I do have a Liberty model. With that step completed, I go back to the original title station to have the paperwork processed. If everything goes smoothly, I should exit the building with the correct Liberty Model Casita title in my hand. I hope it doesn’t take hours.

How the above plan was modified (what’s new!)

I towed the Casita to the vacant parking lot, arriving at seven thirty. So far, so good. 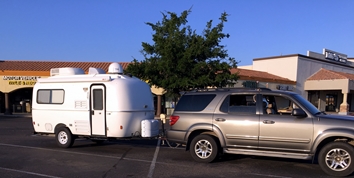 The sun continued to rise and heat the air, so it was at least ninety degrees by the time I left the car and walked over to the DMV office. I was the first to arrive.

I was also the first to find out that, although the office opened at eight, the inspection folks didn’t arrive until nine or nine thirty. I could cool my heels in their air-conditioned office or go next door to Subway and wait there with a cool drink and some food.

I went to Subway and got a drink and a cookie. I had a book to read and thought the time would quickly past.

Unfortunately, their choice of music drove me out within twenty minutes, and I went back to the DMV office and cooled my heels until Samantha showed up just after nine.

She listened to my tale of woe and took it all in stride. She indicated that it wouldn’t be a problem. She gathered her measuring wheel, a binder and we walked to the Casita.

I had explained that all Casita’s look the same from the outside. I showed her the photos of the interior difference between the Freedom and the Liberty. She appreciated the information but wanted to look inside. She examined several cabinets. She was looking for some documentation. There isn’t any.

Samantha went back outside and knelt down and transcribed the VIN information on her official form.

Then she used her measuring wheel (the long pole with the red wheel). It accurately measures the length and width of the Casita. She recorded 17’ for the length and 6’ 8” for the width.

The entire physical inspection told less than ten minutes. However, the remainder of the hour was processing the paperwork. I signed a few forms and was issued a new title identifying my Casita as Model 17LD.

It cost $15 for the personal inspection and $4 for the new title. I finally breathed a sigh of relief and left just before ten o’clock.

Having this Casita is always an adventure.

One thought on “The Original Hybrid Casita”