Hole in the Fence

It’s a beautiful August 27 Sunday in Surprise, AZ. That’s because it’s just a little after six in the morning. The temperature hovers around 84 degrees. If today ends up like yesterday, we will be sweating in 115 heat by the afternoon.

But for now, it’s wonderful. I’ve decided to hit Walmart for some groceries and then Sprouts. So, I am varying my dog exercise route a bit. Instead of the long thirteen-mile trek out Grand Avenue, I’m going to the shortest exercise area. It’s less than a mile from the house.

We got there as the sun was appearing. That ugly water tank on the left provides water for trucks to spray the ground. It keeps dirt from blowing everywhere. There is a green mesh fence, backed up by a six-foot chain wire fence. They prevent people and animals from entering the entire city block.

At least that was the intent. We had powerful winds come through the last few weeks. Some of the screen is either gone or ripped enough so anyone can see process as the area is transformed into a mental health facility.

Here is a photo that shows most of the lot where we exercised. The wind tore away the protective green fence webbing. Although it isn’t full daylight, there is enough light for me to release Bernie and Chris.

With the construction finished, a mental facility will be the newest addition to Surprise. I’ve heard folks across the valley to the east (Mesa) didn’t want it in their neighborhood. (that’s probably a rumor).

Chris poses next to a picture of the future structure. 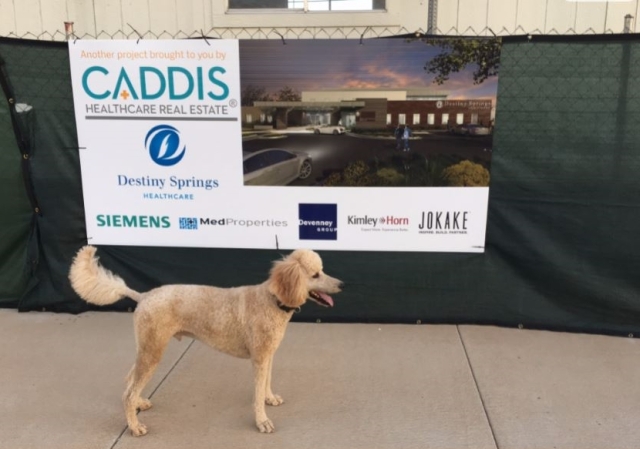 When the wind came up, exposing gaps in the chain-link fence, both dogs went window shopping; They were hoping they could enter their former playground. 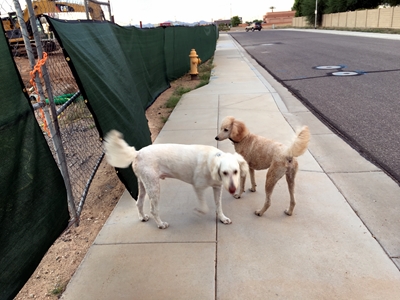 However, they managed to find a hole in the fence. It’s that narrow vertical slit (looks white) in the background.

Chris never had a problem, but Bernie did have to squeeze through. It was about two weeks before I realized they were enjoying the area inside the fence.

I walk the sidewalk outside the fence. By the time I reached their hidden hole, they had already popped back through and joined me.

I thought they were just searching those bushes for rabbits. And knowing they would return, I had no idea they were inside the fence.

Until I spotted Bernie with his nose to the inside of the fence.

No problem. Calmly, I called him and started walking toward the bushes. He flashed around the corner, squeezed through the hidden hole and joined Chris and me.

You can understand why this next photo doesn’t interest the dogs. The gate is completely open. There is no challenge for my dogs.

By now, both dogs have investigated, played and with their tongues hanging out, it’s time for a drink. 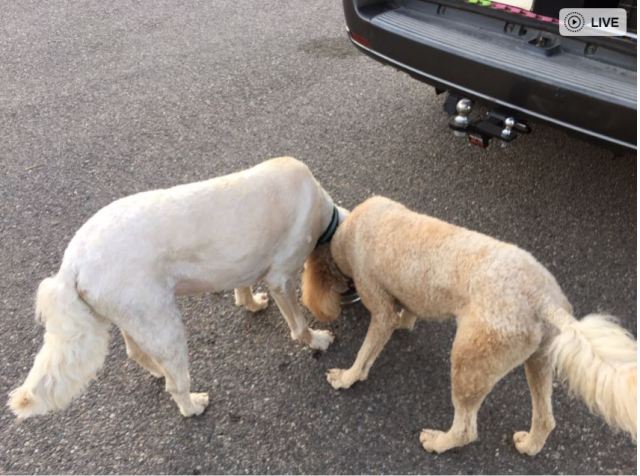 It’s about six thirty. It’s time to hit Walmart and Sprouts, then home for breakfast this Sunday morning.