When my desire to be positive turns sour

I like to blame my situation on it. It has to be an object… never a person. It also has to be so ridiculously impossible people knows I am joking.

Yesterday was supposed to be a very good day. Mother Nature tried to shape it with fantastic landscapes as we drove to Camp Verde. The pale blue sky had popcorn white clouds and a bright sun.

It was nine in the morning of July 17, 2017, and we were taking a short break to visit Montezuma Castle. We wouldn’t take the tour. Katie wanted to renew her Lifetime pass, and I wanted to buy one. Until August, the price was $10. Then it leaps to $80.

We had all three dogs in the car. We didn’t get there until 10:30, and although we were 3000 feet higher than my home in Surprise, it required the car’s a/c.

Did you know Montezuma Castle strongly encourages you to bring your pets with you on tour? I was very glad Bernie and Chris are therapy dogs. They love being around people. As it happened, there were two large tour buses park alongside the parking lot.

As we walked to the entrance, we were met by a huge flood of people just finishing the tour. Bernie, Chris, and Popi waded through them without any fuss.

It only took a few minutes for us to receive our pass. Katie lingered long enough to see what else she would find for souvenirs.  I went outside with the dogs.

Not all owners have full control of their dogs. We almost me a huge, young Rottweiler.

Bernie and Chris were alert, watching this monster pull the woman through the crowd. If she was skiing behind a speedboat, she couldn’t have had a better posture.

Her head was flung back, both arms fully extended and she was back-pedaling as she tried to hold the dog back. The dog had spotted my dogs and looked like he wanted to be friendly. Bernie and Chris didn’t help matters because they signaled encouragement.

Thankfully, the woman almost threw herself sideways off the sidewalk, jerking the dog to follow. The falling landscape helped. Woman and dog went down the hill a short way as the dog was distracted by some bushes.

Katie was still inside, so I took the dogs back to the car and poured at least a quart of water into their bowl. While both dogs lapped, Katie and Popi appeared. Popi got his share of water. Then we got into the car and headed back to reality.

The Reality was this: 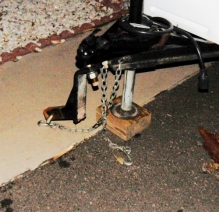 If you have been following my Casita adventure, you know that the Casita refused to part with Katie. For more than three days, our efforts failed. We were forced to separate the hitch from the van. Its massive appendage hangs from the coupler.

Although the trip was a grateful distraction, mentally my mood dulled the total excitement I usually enjoy.

Here’s a photo of the culprit:

It isn’t a complicated mechanical device. “The coupler latch sits on top of the tongue. It raises and lowers to secure or release the hitch ball in the coupler.”

It ain’t doing its job.

In matters like this, when a piece of equipment is jammed… you give it a good whack. I needed a good whack tool. I went to Home Depot and bought a four-pound sledgehammer.

At this point, my internal temperature matches the outside temperature. Both hovered in the triple-digits. It didn’t help that the normally low humidity had risen to over 50 percent as potential storm clouds made their appearance. I sweated as I swung the hammer.

I used that excuse, after several whacks… to declare it was too hot and I quit.

No whacking made any difference.

I went inside, got water and lay down for almost three hours.

Round Three ended, with the Casita still winning.

Tuesday will be the fourth day we battle. I am convinced a professional needs to be called in. Katie has one more trick up her sleeve. She is a professional in her own right… so I’m willing to learn.